An HTMA (Hair Tissue Mineral Analysis) test uses hair tissue for analysis. One of the main reason why hair is used is because unlike blood or urine,  it is stable over a long period of time and provides several months of biochemical activity in one sample.  Collecting a sample is non-invasive and can be done without the need for veterinary intervention.

Physical, emotional and biochemical stressors deplete the body of many essential nutrients. Chronic illnesses, in many cases will develop in stages over time, and environmental illness is the result of exposure to environmental toxicity, which no a days we see more and more. These combined with other health assaults will result in the accumulation of toxins that build up in the tissue and disrupt normal body functions.

The animal HTMA test identifies deficiencies or excesses in essential mineral levels and ratios plus will bring to light toxicities that may be of concern.  The HTMA comprehensive lab report profiles charts, bar graphs, and supportive documentation to show us the metabolic status of the canine and  provides recommendations to address mineral imbalances, reverse physical degeneration, and revitalize their cellular metabolism (energy).

An HTMA test is considered a standard test used around the world for the biological monitoring of trace elements and toxic metals in human and animal species (including both canines and equine).  This diagnostic test uses the same analytical technology as is used for soil testing and testing of rock samples to detect mineral levels.  Why hair, well hair is one of the defining characteristics of mammals; much like other bodily tissues, it contains minerals that are deposited as the hair grows. The “living” portion of the hair is found in the follicle and the hair that is visible is the hair shaft, which exhibits no biochemical activity and is considered “dead.” The mineral composition within the cortex remain intact indefinitely as the hair continues to grow.  A 1 to 1-1/2 inch sample of hair cut from as close to the skin as possible provides information about the mineral activity in the animal over a 3 to 4 month period. 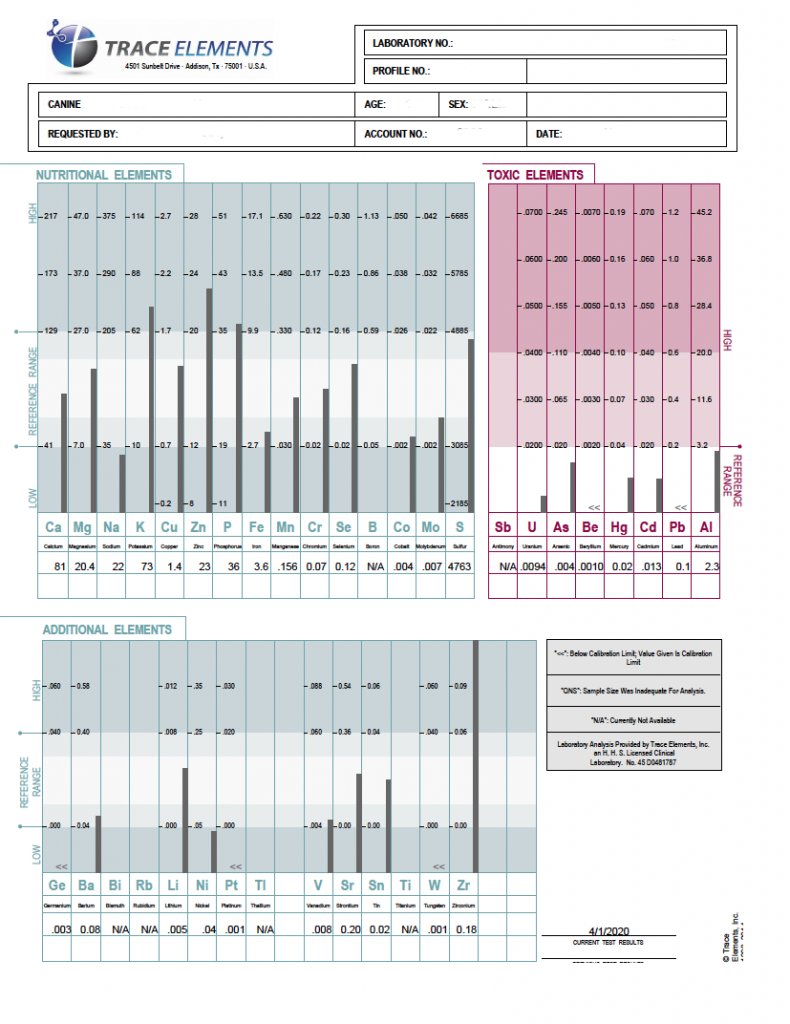 Important areas of the report include:

The toxic elements section displays the results for each of the reported toxic elements.  These elements can enter the body through inhalation, intestinal absorption and even be absorbed through the skin, depending upon their chemical form.  Since it is acknowledged that there are no safe levels of the toxic heavy metals tested, its is preferable that all levels be as low as possible and within the white reference section. Any test result that falls within the upper colored area should be considered significant; and further investigation may be warranted to determine the possibility of clinical significance and the steps that can be taken to mitigate exposures.  These toxic elements are well-known for their interference upon normal biochemical function and are most commonly found in the environment and therefore are present to some degree in all biological systems.  These metals pose a concern for toxicity when tissue accumulation occurs in excess.

This chart shows a measurable level of uranium, arsenic, mercury, cadmium and  aluminum levels.  Arsenic is number one on the ATSDR’s 2011 Priority List of Hazardous Substances (mercury is #3).  Arsenic is also a known carcinogen and affects the skin, digestive system, liver, nervous system, and respiratory system.  Arsenic compounds can create reaction in the body that disrupt enzymes that are involved in respiration of cells, fat and carbohydrate breakdown and their metabolism.  The accumulation of toxic levels of arsenic can result in paralysis, coma, cardiovascular issues, and death.

Aluminum is a common toxic element found at high levels in canine HTMA assessments.  Aluminum has been described as a protoplasmic poison and a persistent neurotoxin.  While the body can excrete aluminum in its natural form, the element, like mercury, is toxic to all life forms when in their tissues.  It will accumulate in the brain, as well as nerve tissues and in the bones and teeth.  A follow up canine HTMA test revealed that dietary and supplement changes that were made brought tissue toxin levels down and  notable health improvements in the dog were seen. 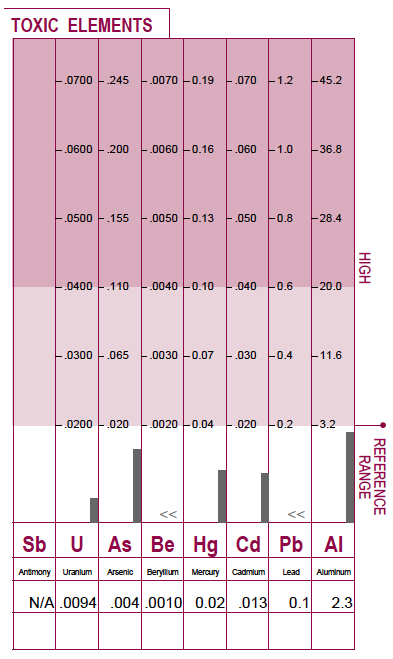 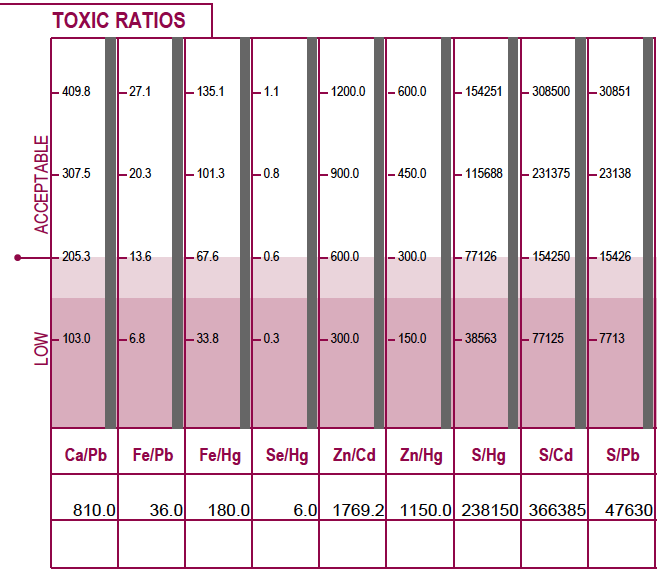 All animals are exposed to toxic metals to some degree.  The retention of these toxic metals, however, is dependent upon the animal’s susceptibility and potential exposure.  The balance of the protective nutrient minerals within the body in relation to these heavy metals can frequently be the determining factor to this susceptibility.  By examining the toxic metal levels in relation to the protective minerals, the extent to which the heavy metals may be involved in abnormal chemistry can frequently be seen.  Each toxic metal ratio result should be in the upper white area of the graph, and the higher the better.  Toxic ratios that fall within the darker red area may indicate an interference of that toxic metal upon the utilization of the nutritional element.

Toxic Ratios:  This chart indicates adequate levels of all protective nutrient minerals, at least in relation to toxic metals that have been noted as accumulated.  This means that the dog does have enough of theses nutrient minerals to protect against tissue accumulation of  heavy metals.

Extensively studied, the nutrient minerals have been well defined and are considered essential for many biological functions.  They play key roles in such metabolic processes as muscular activity, endocrine function, reproduction, skeletal integrity and development.  This section of the report shows nutritional mineral levels that may reveal moderate or significant deviations from normal.  The light blue area of the graph’s mineral levels represents the established reference ranges as determined from statistical analysis of healthy canines.  A mineral level that is outside the reference range can be identified as dysfunctional showing up as an excess or deficiency.

Nutritional Elements:  This chart shows severely depleted sodium levels and sodium is the main driver for strong adrenal response.  When deficient, sodium will decrease the dog’s performance, especially when relating it to speed, as they will tire quickly at high intensity levels.  Since zinc will tend to drive down tissue levels of sodium, bringing zinc and sodium levels into balance will benefit this canine significantly. 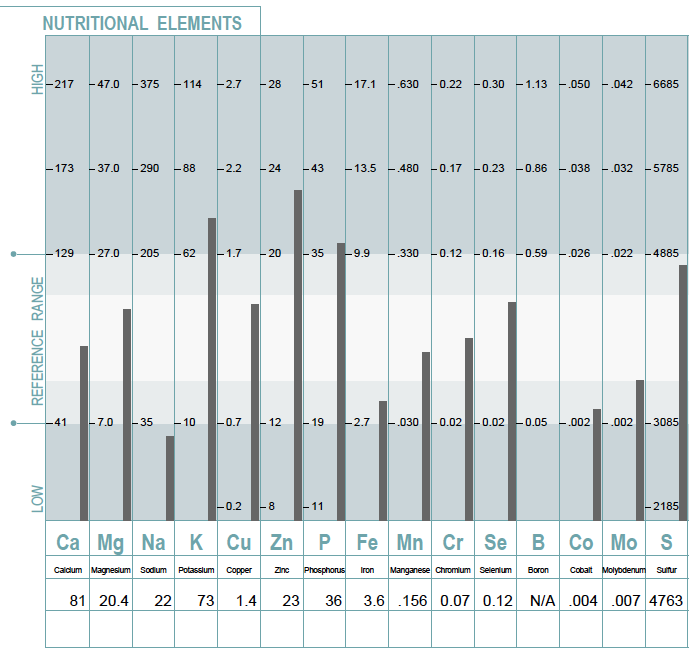 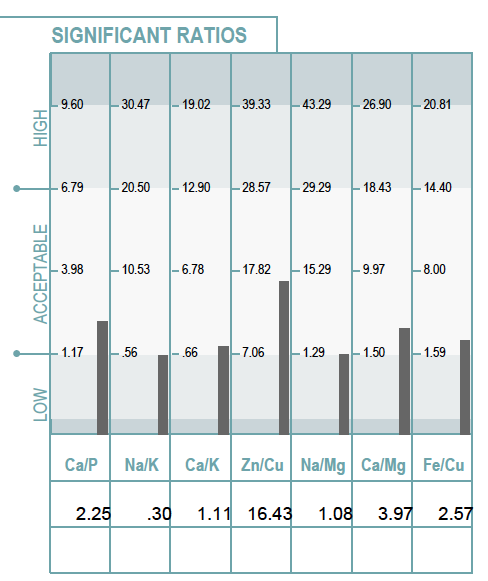 If the synergistic relationship (or ratio) between certain minerals is disturbed, studies show that normal biological functions and metabolic activity can be adversely affected. The light blue area of the graph’s mineral ratios represents the established reference ranges and determined from statistical analysis of healthy canines.  A mineral ratio that is outside the reference range can be identified.  Even at extremely low concentrations, the synergistic and/or antagonistic relationships between minerals still exist, which can indirectly affect metabolism, cellular energy, the stress response and more.

Significant Ratios:  This example shows several ratios near or just outside of the established reference range.  A healthy dog will have all ratios near the center (white area) of the graph reference range.  The Zn/Cu ratio on the graph would be considered healthy.  Each ratio represents different metabolic functions and can identify trends toward health problems.  The report will identify and explain any ratios that are outside of the reference range and provide recommendations for correcting the imbalance.

The endocrine index is a graphic presentation of the pituitary-adrenal-thyroid relationship, or P.A.T. axis.  These endocrine glands influence energy production on a cellular level and ultimately the health and performance of the dog.  Ideally, there should be a balance within the P.A.T. The levels need to not be at the ideal range as this range is used only as a reference point.  However, they should be balanced above, below or a the “ideal” point.  A major deviation between the P.A.T. axis can be indicative of a tendency or trend toward an adverse health condition.  In the performance animal, a major deviation of the P.A.T. axis is reflective of an adverse affect upon speed and/or stamina.

A balanced P.A.T. would appear on the above index with all three bar graphs extending the same length to the right.  Ideally, all three would extend to the mid-way point, but as mentioned previously, a balance anywhere within the box is acceptable.

The performance index displays the relationship of energy producing glands (thyroid and adrenal) on speed and endurance.

Performance Index:  This example reflects the domination of the thyroid gland over the adrenal glands.  This indicates endurance over long distances or for longer periods of time.  However, speed, quickness and power over short time periods or distances are affected negatively.

Essential nutrient minerals and vitamins are required for proper growth, development, and physiological functions.  Your pet’s body cannot synthesize these minerals, so they must obtained from the diet.  Supplement recommendations are provided to help correct and improve mineral levels and ratios.  The purpose of the recommendations is to re-establish a normal balance of body chemistry through individually designed supplement suggestions.  By improving your pet’s mineral levels and ratios, you will enhance his or her ability to utilize the nutrients efficiently resulting in improved energy production and overall health.

Gut Health is Critical for Horses!

Using food as fuel to achieve your personal and professional goals with Kathy A. Davis

The Scientifically-Established Health Effects of EMF with R Blank